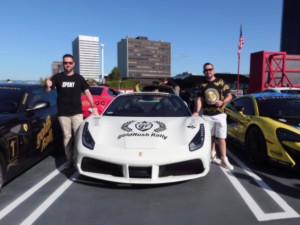 Liam (L) and Ben Hennock at the startline of goldRush Rally 9INE!

Liam Talbot, the leader of the Australian GT Championship is set for a new adventure over the next week when he tours around America with good friend Ben Hennock in the world’s premiere automotive lifestyle rally, goldRush Rally 9INE.

The duo will take to the wheel of a Ferrari 488 for the exotic rally, that begins on Saturday at the magnificent Petersen Automotive Museum in Beverly Hills, Los Angeles, before winding its way through five states and ending in Las Vegas.

Talbot and Hennock join a number of colourful sports, entertainment and business leaders in the field – the identities of which are kept closely guarded by organizers.

Along the way, they will stretch the legs the Ferrari through a number of competitive timed stages on racetracks and drag racing contests. Each destination across the week features an evening party with world class entertainers – Justin Bieber was the headline act at last year’s Vegas wrap party!

Five star accommodation, spectacular locations and even more outlandish GT cars are the feature of the goldRush Rally 9INE.

Talbot is not new to the surrounds of a Ferrari cockpit – he won the Blancpain Endurance Series in Europe last year in a Kessel Racing-prepared 458 and has raced at Yas Marina Circuit in a Monster Energy-backed Ferrari with MOTOGP World Champion, Jorge Lorenzo.

His personal collection of sportscars includes an Aston Martin ONE-77 – the only one in the
Southern Hemisphere and one of just 77 examples worldwide.

He swept to the lead of the Australian GT Championship in his MEGA Racing Porsche 911 GT3-R last weekend in Perth, securing a race win – which added to his victory in the GT category at the Formula 1 Rolex Australian Grand Prix and class victory at the Bathurst 12 Hour race, where he finished fourth outright.

It was Hennock’s idea to do the goldRush Rally 9INE, his business – WashIt Mobile Truck Wash – has supported Talbot’s racing efforts for several years and the pair have been close friends for some time.

“The goldRush Rally is recognised as one of those ‘must-do’ things if you are a sportscar lover,” said Hennock in Los Angeles. “I’ve watched the videos for many years of how much fun it looks like, how amazing the cars are and decided it was time to do it.

“I’m so glad Liam was able to take the time out of his schedule to join me – he knows his way around a Ferrari having had a great deal of success in the marque on some of the great Formula 1 racetracks of the world.”

The challenge will be a different one for Talbot – who is more accustomed to FIA-GT3 specification racecars.

“Touring across America among a pack of exotic cars with an eccentric collective of people from all over the world is something you dream of when you’re lining your Hot Wheels cars up as a kid! We’re getting the chance to do it in real life!

“Ben decided he wanted to do goldRush Rally 9INE and I’m fortunate he asked me to join him and that our schedules lined up. It is something that has no pressure attached to it, which will be a nice change.

“This is the first time that I will have done a rally like this, so it will be very different,” laughed Talbot. “My experience will come to the fore in the competitive timed stages, but the overriding idea with this is just to have some fun and enjoy a week on the open road in an amazing car.”

More can be found about goldRush Rally 9INE at www.goldrushrally.com or its Facebook page https://www.facebook.com/goldRushRally.


Share this:
×
Item Added to your Cart!
Continue Shopping