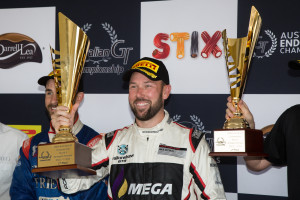 “An organization combining Walkinshaw, Andretti and United Autosports is one incredible nexus of motorsport knowledge,” said Talbot. “I cannot think of a team anywhere in world motorsport that boasts a combination like that.

“It is extremely exciting for the guys in the Walkinshaw Supercars operation and I congratulate Martine and Ryan on being able to orchestrate this arrangement.

“Andretti is obviously one of the most recognised names anywhere in the world – motorsport or not – and the business that Michael has built through IndyCar, Global Rallycross, FIA Formula E and multiple other categories is one of the strongest platforms on the planet.

“The experience on the commercial side that Zak Brown and his partners at United Autosports bring to the table is formidable and of course, the link to Zak with McLaren Formula 1 and his media and marketing properties brings a new direction and spotlight to the team.

“As for Walkinshaw – their history in the sport globally speaks for itself. On a personal level, the family and team have become good friends as well as partners in racing.

“What we’ve achieved this year with the MEGA Racing Porsche has been an unbelievable ride and although I’ve been involved in the sport only a short time, Walkinshaw GT3’s professionalism is on par with and above many of those teams that I experienced in the Blancpain Endurance Series in Europe.

“I wish Walkinshaw Andretti United all the best with the new partnership – and we’ll be certainly watching on with excitement as they Walk And Unite toward the Virgin Australia Supercars crown.”

Liam Talbot – the reigning Blancpain Endurance Series Champion who has raced previously with Jorge Lorenzo – will have his next outing in the Australian Endurance Championship at Hampton Downs in New Zealand, October 27-29 in the MEGA Racing Porsche 911 GT3-R with John Martin. He won the Pro Am class of the Liqui-Moly Bathurst 12 Hour in the Walkinshaw GT3-prepared Porsche in February and was the runner up in the Australian GT Championship this year.