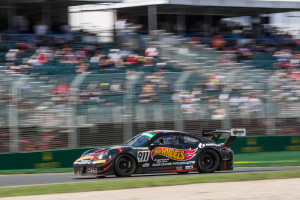 Liam Talbot will be flying solo this weekend at Sandown

Hot Wheels™ Car Care Products-backed Australian GT Championship front-runner Liam Talbot says the move to ‘go solo’ for the first time in 2018 at Sandown International Raceway this weekend is a strategic one from a Championship perspective.

Up until this point in 2018, Talbot has been joined by John Martin in a two driver attack aboard the Porsche 911 GT3-R, however this weekend Martin – the former Le Mans 24 Hour LMP2 pole-sitter – will be part of the strategy group at Walkinshaw GT3.

“With John’s ranking under the Australian GT rules and a relatively short lap of Sandown, we are penalised with a longer minimum pitstop if he is in the car, so therefore we’ve elected from a Championship perspective that I’ll do it alone this weekend,” explained Talbot. “It is purely a strategic move and Johnny’s fine with that, however he’ll be in our bunker still and we’ll be drawing on every piece of his experience.

“The driver rankings can be a bit out from time to time so we have to work with what we are presented as best as possible and that is what Mathew Nilsson and the Walkinshaw GT3 team has elected to do this weekend.”

Currently second in the points standings heading to Sandown – which is predicted to break the weather drought that Melbourne has been experiencing recently – Talbot is looking to build on the success of the most recent round of the Championship at The Bend Motorsport Park, which doubled as the opening round of the Australian Endurance Championship where he and Martin finished second.

“We’re in a good place heading into the weekend from a points perspective, Sandown’s a great track, generally we’ve gone well there. This weekend with it predicted to be wet should suit the Hot Wheels™ Car Care Products Porsche – we saw what John was able to do with it at the Grand Prix in the wet and we’ve learnt a lot more about its characteristics since then, including some more wet running at The Bend.

“With it being a Shannons Nationals event, there will be less rubber down than what would be at a Supercars event for example, but if it is wet, that won’t be a major factor.”

Since The Bend event, Talbot has been busy off-track building his fitness program.

Last weekend, the Hot Wheels™ Car Care Products athlete took part in his first ever half marathon, completing the 21km without drama.

“Having done endurance races at some of the best racetracks in the world, this was a completely different style of endurance race,” said Talbot. “The mental side of it was very similar to racing, particularly keeping the mind on the job during the tougher periods of the stint was something I could draw parallels – you really had to treat it like a race and the drink stations like pitstops.

“Pull in, give the body some Epic Shine™ and continue on! It was a lot of fun and has really prepared me for this weekend well. We’re going to need every single piece of focus throughout this event at Sandown.”

Australian GT will have just one practice session on Friday before a pair of Qualifying sessions on Saturday and race one, followed by two races on Sunday. A livestream of Sunday’s activities will take place on www.thenationals.com.au.