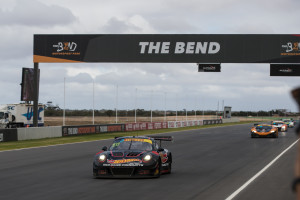 The weekend was mixed for all competitors in the Australian GT Championship after the race format was changed from being a two part, 500km race on the full 7.77km The Bend GT circuit to being a single race on Sunday on the shorter circuit that will be used for the Virgin Australia Supercars Championship later this year.

Drivers and crews were faced with every weather condition imaginable – from extreme heat, to rain and even major dust storms that swept across the brand new facility.

The Hot Wheels™ Car Care Products duo qualified the Walkinshaw GT3-prepared Porsche 911 GT3-R on the front row of the grid. The two part qualifying session was conducted on the longer circuit and times averaged between the two drivers.

Martin started the race and skipped away to build a solid early lead in anticipation of the stationary pitstop time. The Safety Car neutralised the field cutting that gap down to nothing. Martin got back up on the wheel and established another solid lead before the Safety Car was once again triggered.

Martin handed the car over to Talbot, the Blancpain Endurance Series Champion absolutely relishing the test that faced him as he attacked the new circuit. Talbot was in his element on the European specification circuit and set about chasing down the front runners.

Talbot’s stint included a number of spirited fights including one with Max Twigg and later getting around the AMG of Peter Hackett.

Towards the end, Martin was placed back in the car to bring it home and was able to finish in second position, starting the Australian Endurance Series Championship off well and bringing their points haul in the Australian GT Championship forward, as trouble befell those that had been in front of them on the Championship table.

The strategy by the Mathew Nilsson-led Walkinshaw GT3 squad was on the money as always and despite other marques having Balance of Performance advantages, Talbot and Martin were able to out-strategise the competition to come home in second position.

The next outing for Hot Wheels™ Car Care Products supported athletes will be next weekend at Phillip Island with the Virgin Australia Supercars Championship event when James Courtney and Scott Pye will line up for Walkinshaw Andretti United and continue their upwards surge in the Championship that sees both drivers in the top 10 of the Driver’s Championship and the team second on the Teams’ Championship.

The next round of the Australian GT Championship for Talbot and Martin will be at Sandown over the weekend of May 11-13.

“What a result this weekend, we really can’t believe how well it ended up going,” Talbot reflected. “We had to work hard for the result as things were against us a little. The strategy as always from Mat and the Walkinshaw GT3 team was absolutely on point and if it wasn’t for picking the strategy correctly, we couldn’t have been up as far as what we were.

“John did an absolutely brilliant job in his stints – unfortunately a couple of Safety Cars really cut the lead and the hard work that he put in. The result today has got the Hot Wheels™ Car Care Products team back in the game in the Australian GT Championship and we couldn’t have asked for a better start to our Australian Endurance Championship campaign.

“The Bend Motorsport Park is one of the best facilities that I have ever been to and I thought the GT track was absolutely fantastic. It was frustrating that we weren’t able to use the full circuit for the race as I think it was perfect for this style of car and would have been something very unique.

“Unfortunately, the decision was made for various reasons, but I still think that we could have run on the longer circuit.

“Either way, it was awesome to christen a brand new track and get things back on track for our Championship with some awesome results and gave us the opportunity to learn even more about the Hot Wheels™ Car Care Porsche.”