MEGA Racing Porsche Poles at the Park for Aus Enduro 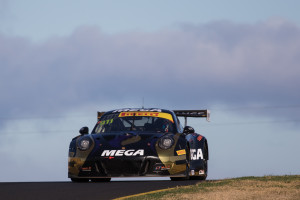 It is the second time in consecutive years that a Walkinshaw GT3-prepared Porsche 911 GT3-R will start with clear air in front of it for the Australian Endurance Championship race at the Eastern Creek venue.

Martin was fifth quickest in the opening qualifying session, setting a 1:29.0078. Talbot backed that time up with a 1:29.0210 to see the MEGA Racing machine the fastest in the second session.

The pair showed their extensive European experience, delivering consistent times which led to a best average time across the field.

The strong winds that have befell Sydney this week created a headwind that meant the full aerodynamic advantage of the FIA GT3 machines could not be put to full use.

Both Queensland-based drivers feel comfortable with the pace that the Walkinshaw GT3-prepared machine is generating and the Pirelli tyres are working strong with the package.

The #911 – backed by Australia’s newest Petroleum company, MEGA Limited – entered this weekend’s event fifth on points and have generated a solid haul of qualifying points after today’s activities.

The MEGA Pole for Talbot and Martin came just after the MEGA Racing-supported Gary Jacobson dominated qualifying in the Dunlop Super2 Series.

The 129-lap, 501km Australian Endurance Championship round two race starts tomorrow at 7:35am.

It will be live on television on Fox Sports 506 or at Sydney Motorsport Park, Brabham Drive, Eastern Creek. It is a pre-cursor to the Red Rooster Sydney Super Sprint – Sydney’s round of the Virgin Australia Supercars Championship.

Follow Liam Talbot Racing’s social media channels (below) for updates throughout the race. 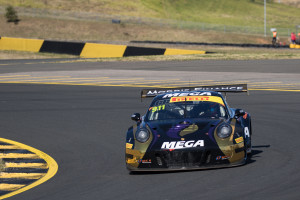 “We’re called MEGA Racing for a reason and the Porsche was just MEGA!! It was so hooked up today.

“You know what? It is just so cool to be here with John, coupled with our personal history working together as young guys in North Queensland and of course the history of Walkinshaw GT3 with what they’ve done here in the past, it is just awesome.

“I love starting on pole position – it gives me the chance to get the elbows out and say you aren’t coming past me! Seriously though, turn one and turn two should be interesting – bring it on!”

“Liam was the star today – his qualifying time was pretty MEGA, so matched right in with the first session, that’s awesome really, it’s good to see – we’re a perfect pairing and really going forward into tomorrow’s race and can’t for it to come now.

“Hopefully Liam does the job off the front and he comes and hands over a decent lead to me and then I just get in and bring it home. I can have a bit of a sleep-in while he kicks things off, play the night watchman and do the easy bit at the end.”