CAMS Australian GT Championship leader, Liam Talbot is aiming to continue his good form on street circuits as the Championship heads to the Watpac Townsville 400 this weekend for its fourth round of five.

Talbot won the last street race in the Championship conducted at the Formula 1 Rolex Australian Grand Prix in Melbourne and takes the MEGA Racing Porsche 911 GT3-R north looking to build on the performance at the previous round in Perth, which saw him sweep to a 28 point Championship lead.

As the shortest circuit on the Championship at 2.86 kilometres, Reid Park in Townsville is a unique challenge that combines some elements from Albert Park with those of the season-opening Clipsal 500.

Having not raced since the opening round of the Australian Endurance Championship in late May, Talbot has spent plenty of time testing the circuit on his SimworX home simulator.

Not only will it be his first visit to the Townsville track, he’s never been to the city previously – but does have an affinity with the North Queensland town through many friends made through his work in the Central Queensland mines when younger.

The Walkinshaw GT3-prepared Porsche should be suited to the circuit, using its torque to pull clear from the tighter parts of the Townsville circuit.

Talbot – backed by Australia’s newest Petroleum company, MEGA Limited – is the spearhead for the Porsche challenge in GT3 racing in Australia and takes on some of the world’s great marques in the quest for the Australian GT Championship.

Aside from leading the GT Championship heading into its penultimate event, Talbot is currently fifth in the Australian Endurance Championship after its opening round. He shares the MEGA Racing Porsche with John Martin.

The Australian GT Championship will be supporting the latest round of the Virgin Australia Supercars Championship. 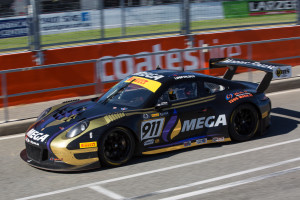 The MEGA Racing Porsche will make its debut in Townsville

QUOTEBOARD – LIAM TALBOT:
“The MEGA Racing team is in a great position heading up to Townsville, three races around the tight street circuit will provide numerous challenges – the major challenge for me is to maintain the performance from the previous rounds.

“The track appears to be much like Clipsal – there are elements of risk and reward that you have to take into account.

“From my perspective, I’m the Championship leader so will be the first on track in practice and qualifying, which is a huge advantage in terms of getting the clear air to set quick lap times out of the box.

“The Walkinshaw GT3 team has worked extremely hard on the qualifying pace – and that was rewarded by topping the second qualifying run in Perth and banking the points from that.

“It will be my first time to Townsville and to this event. Universally, everyone talks it up as being one of the better Supercars events, so I can’t wait to see it first hand.

“I have many friends that now live in the area from when I worked in the Central Queensland mines, so it will be their first opportunity to see me race – so the MEGA Racing team will have plenty of support throughout the weekend.

“Driving the SimworX simulator has allowed me to complete race long simulations on the track and get a feel for its characteristics. With no testing being available there, it is a little more difficult, but the simulator and having my eye in on street circuits this year helps a great deal.

“Outside of that I’ve been working hard on the fitness side between events, as it will be pretty warm in Townsville, the schedule for Saturday and Sunday is pretty hectic. It is a physical circuit, so we want to be ready to go.

“I hope with the assistance of Walkinshaw GT3 the MEGA Racing team can continue the good form and extend the Championship lead this weekend. Bring it on!”