Talbot and Martin among front runners in NZ practice 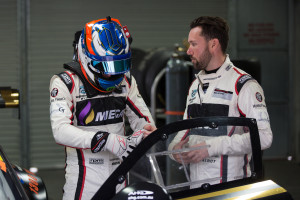 Liam Talbot and John Martin have set a strong platform for their quest to advance up the Australian GT Endurance Series ladder in fine style aboard the MEGA Racing Porsche in wet conditions today at New Zealand’s Hampton Downs.

Currently second in the Championship, Martin was among the frontrunners throughout the solitary 20 minute session today, with the Walkinshaw GT3 team doing its utmost to extract as much data as they could with the conditions presented.

Talbot – who was runner up in Australian GT this year – was strong against his fellow “non-professional” level drivers.

The Porsche 911 GT3-R supported by Australia’s newest Petroleum company, MEGA Limited, didn’t have a full wet setup applied. The team elected to save fresh wets for tomorrow’s twin qualifying sessions – that will set the grid on average from the two drivers, followed up with a top 10 shootout chaser. 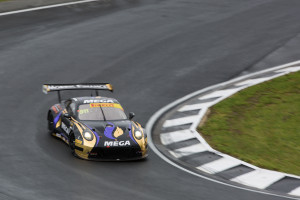 The top 10 shootout will be aired live on TV3 New Zealand with the race airing live on Fox Sports 507 in Australia and TV3 on Sunday.

The wet weather is expected to continue Saturday with it clearing for a predicted dry race Sunday.

“It’s been a great day for the MEGA Racing team making its debut here in New Zealand. It is a shame about the weather, but we are in New Zealand so changeable conditions are no real surprise,” said Talbot.

“The MEGA Racing Porsche was really good in the wet, we didn’t bolt a new set of green wet Pirelli tyres on it to set a ridiculously fast lap time, which cost us some overall pace. It is expected to produce the same weather tomorrow with potentially the first dry running coming on Sunday during the race.

“John was up there during today’s session among the frontrunners, I was right among the co-drivers, so overall we’re a pretty strong combination which is reflected in our qualifying at the opening two rounds of the season where we’ve been on the front row and pole at the last round. We are in a good window for the race.

“Despite only one practice today, we’re getting more track time overall this weekend than we have been, so we’re thankful for that and it is going good. We’ll get more practice tomorrow before qualifying and the top 10. At this track, anything can happen, especially with predictions of mixed weather thrown in for qualifying.

“We’re in a great position right now and quietly confident. We’ll go out, do our own thing and we have some strategy up our sleeve, so hopefully it will all come right at the end of the 500 kilometres.”