Talbot: ‘We aren’t aiming for MEGA pace at this stage of the 12 Hour game’ 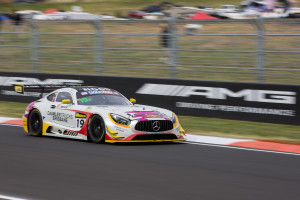 The first opportunity for Liam Talbot to visit Mount Panorama in a Mercedes-AMG GT3 has started well, with the MEGA Racing-backed Hog’s Breath machine being one of the best placed Pro-AM cars in the opening practice sessions for Sunday’s Liqui-Moly Bathurst 12 Hour.

The defending Pro-AM Champion along with team-mates – Bathurst 1000 Champion David Reynolds, partner from last year John Martin and car owner Mark Griffiths cycled through a program in the white and pink Hog’s Breath #19 to get all acquainted ahead of tomorrow’s qualifying and ready for Sunday’s race.

The four drivers have really concentrated on exploring where the pace can come from in their race package rather than chasing outright times at this point.

Following a test session in the leadup, Talbot reported a lot of confidence in the thundering 6.3 litre V8-powered Mercedes-AMG GT3, the confidence being translated to performance from the time the car hit the track for first practice this morning.

The four drivers didn’t finish outside the top 13 in each of the four practice sessions today (13th, 12th, 12th and 13th) and while the pace at the front was the fastest ever seen on a Friday at the Liqui-Moly Bathurst 12 Hour, Talbot and team are focused purely on what they can do in Sunday’s race that starts at 5:45am local time.

Tomorrow, there will be a final 40 minute practice session at 8:55am local time, before they take part in a Class A-only 30-minute qualifying session at 11:55am. Live video and timing of these sessions can be watched at www.bathurst12hour.com.au. 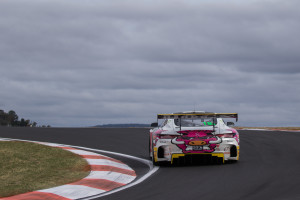 The Mercedes-AMG backed by MEGA and WashIt Australia was competitive

Should the car qualify inside the top 10 – which Talbot says is achievable but not an outright focus, the Top 10 Shootout for the Allan Simonsen Trophy will take place at 4:15pm (AEDST).

The Top 10 and the race will be shown live nationally on 7MATE.

“The MEGA Racing-backed Mercedes-AMG GT3 is certainly competitive and the times are tumbling at the top, but at this stage, our focus is on getting each of us comfortable and building a race pace.

“The track is incredibly green still and I don’t think we’ll see it truly rubber up until qualifying tomorrow.

“There are some guys going for Hollywood times up the front, but we’re just chipping away at it and really aiming to fly under the radar.

“I do think we have a chance to make the top 10, but in a 12 hour race, it doesn’t mean a great deal – we just want to have the car underneath us to be there at the end of play come Sunday.”

On driving a Mercedes-AMG GT3 competitively for the first time:

“I had a lot of confidence after our test session, but rolling out this morning the car felt even better than I first thought.

“The Mercedes-AMG GT3 is very easy to drive and quite predictable in what it does. From a personal point of view, I’ve been exploring what the limits are and gradually building up to them.

“It’s still very green on track but is starting to rubber up – which will be fun!”