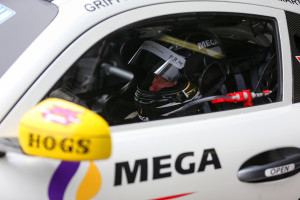 Liam Talbot in the MEGA-backed Merc ready for action

The Mercedes-AMG GT3 to be piloted by Liam Talbot, David Reynolds, John Martin and Mark Griffiths will start tomorrow’s Liqui-Moly Bathurst 12 Hour from 23rd on the grid.

The Class A-only session was punctuated at its halfway point by a red flag for an incident heading up the Mountain, which cost Reynolds in the MEGA Limited-backed Mercedes his momentum when chasing the optimum qualifying time.

All four drivers have had time behind the wheel throughout today’s practice and two qualifying sessions and are feeling comfortable ahead of tomorrow’s 5:45am AEDST race start in the dark.

Whilst the AMG’s don’t have the speed on board compared to other marques due to Balance of Performance favouring other brands, Talbot feels as though the race will be one of attrition and staying out of trouble will be critical in the run to tomorrow afternoon’s finish.

The battle to retain the Pro-AM Title from last year will be a strong one and is expected to be a highlight of the race among the various classes, just as it was last year.

The team will be relying on the experience of all four drivers – Talbot the 2016 Blancpain Endurance Series Champion; Reynolds the reigning Bathurst 1000 Champion; Martin a World Endurance Championship driver and Le Mans Pole-Sitter and Griffiths – who has a wealth of experience at the Mountain.

The race will begin tomorrow at 5:45am NSW time (4:45am QLD) with live coverage throughout the day on 7MATE free-to-air television in Australia.

Internationally, the Liqui-Moly Bathurst 12 Hour will be livestreamed through the event website – www.bathurst12hour.com.au – where live timing can be followed globally.

“We’re all feeling comfortable in the car and I’m really impressed with how this team has gelled. We have team members that haven’t worked with each other both inside and outside the car and it is starting to come together, which is great to see.

“The MEGA Racing-backed Mercedes doesn’t have the outright pace of other cars out there and that is something that is across the brand, not just our car due to the regulations.

“Our strategy is basically to look after ourselves, run our own race and try to stay out of trouble – it is going to be difficult as some of the driving etiquette out there isn’t flash and noticeably different to last year. There was some crazy stuff going on during practice!

“The race is going to be flat out from the first lap and we expect the pace to be fast and plenty of Safety Cars throughout the course of the day. We just have to hang tough and do our own thing and see what happens towards the end!