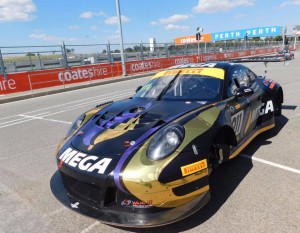 Liam recently had a successful test at Perth’s Barbagallo Raceway

Talbot has never raced on the 2.42 kilometre circuit located around 50 minutes from Perth city. It will be the first race he has had this campaign on a stand alone road course and the first time that Australia’s newest Petroleum company will race in the West.

Known traditionally as an abrasive circuit due to its sandy surrounds, Talbot is confident following his test at Barbagallo last month that the Walkinshaw GT3-prepared MEGA Racing machine will be in good stead on the Pirelli rubber.

The Queensland entrepreneur enters the round – which supports the Virgin Australia Supercars Championship – second on points, 97 from the Championship lead. With 10 points for pole position and 100 points per race victory up for grabs in the two 60 minute race format, there are great opportunities to score points at this round.

Compulsory timed pitstops are back in at this event, which will create traffic from having 20 supreme FIA GT3 cars on one 2.4 kilometre track. This will ensure that strategy and wit throughout the course of the two races will be at the fore for both Talbot and the Walkinshaw GT3 team, led by Mathew “Techo” Nilsson – who has engineered many big endurance race victories for Walkinshaw Racing’s Supercars outfit. 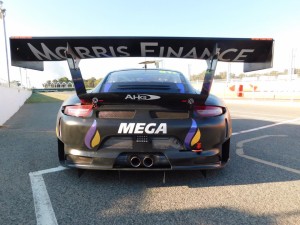 Straight after Barbagallo, Talbot will be heading to the US where he will take part in goldRush Rally 9INE with Ben Hennock – his sponsor from Wash-It Australia. goldRush Rally 9INE sees a string of Supercars wind their way around America from Beverly Hills to Las Vegas, including timed, competitive track sessions – where Talbot hopes his racing experience is an advantage. 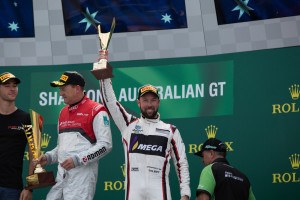 Practice for the third round of the Australian GT Championship will take place on Friday before two qualifying sessions and two 60 minute races on Saturday and Sunday respectively. All sessions will be live on Fox Sports 506.

“It is my first visit to Barbagallo Raceway and coming up to halfway through the Championship this is going to be a critical event.

“We had an extremely positive test session at Barbagallo two weeks ago, the circuit really fits the characteristics of the MEGA Racing Porsche.

“With it being such a short lap, picking the opportunities to pit and serve the required pitstop time is going to be crucial, so too working through any Safety Cars. As we’ve seen in so many other categories over the years in Perth, there are a couple of ‘racecar magnets’ around the circuit.

“Tyres are always a talking point at this racetrack and in our category, however we’re confident our setup will work our tyres well. The Walkinshaw GT3 guys called the tyre situation perfectly at the Grand Prix and the test delivered some great data for us.

“I am MEGA pumped coming into the round as leaving the Grand Prix with a win is the perfect way to build momentum, not just within my driving but among the whole entire Walkinshaw GT3 and MEGA Racing team.

“We’re hoping this weekend will allow us to continue that momentum as we head into Endurance Championship spec at the back end of the month.”